A Charging Order is a statutory remedy available to some degree or another in all states which allow a creditor of a member (in the case of an limited liability company) or a partner (in the case of a general or limited partnership) to place a lien on that member's or partner's rights to distributions, so as to intercept any payments that would otherwise be made to the debtor member or partner by the entity.FN1 The charging order also creates an order that the creditor be paid any distributions during the time of the lien that might have otherwise gone to the debtor member or partner. Importantly, and contrary to common belief, the charging order creates no rights of any kind (even information rights) in favor of the debtor and against the entity itself. However, if the entity fails to honor the charging order, the creditor has various remedies available, most commonly either a contempt charge against the entity or a creditor's suit against the entity.

FN1. Charging Orders are also occasionally found in a few states as, essentially, a method of garnishment in (it seems) predominantly family law cases, but this website does not consider that varietal and no more will be said about them here.

What a charging order does is, at it very essence, quite simple and is demonstrated by the following diagram. 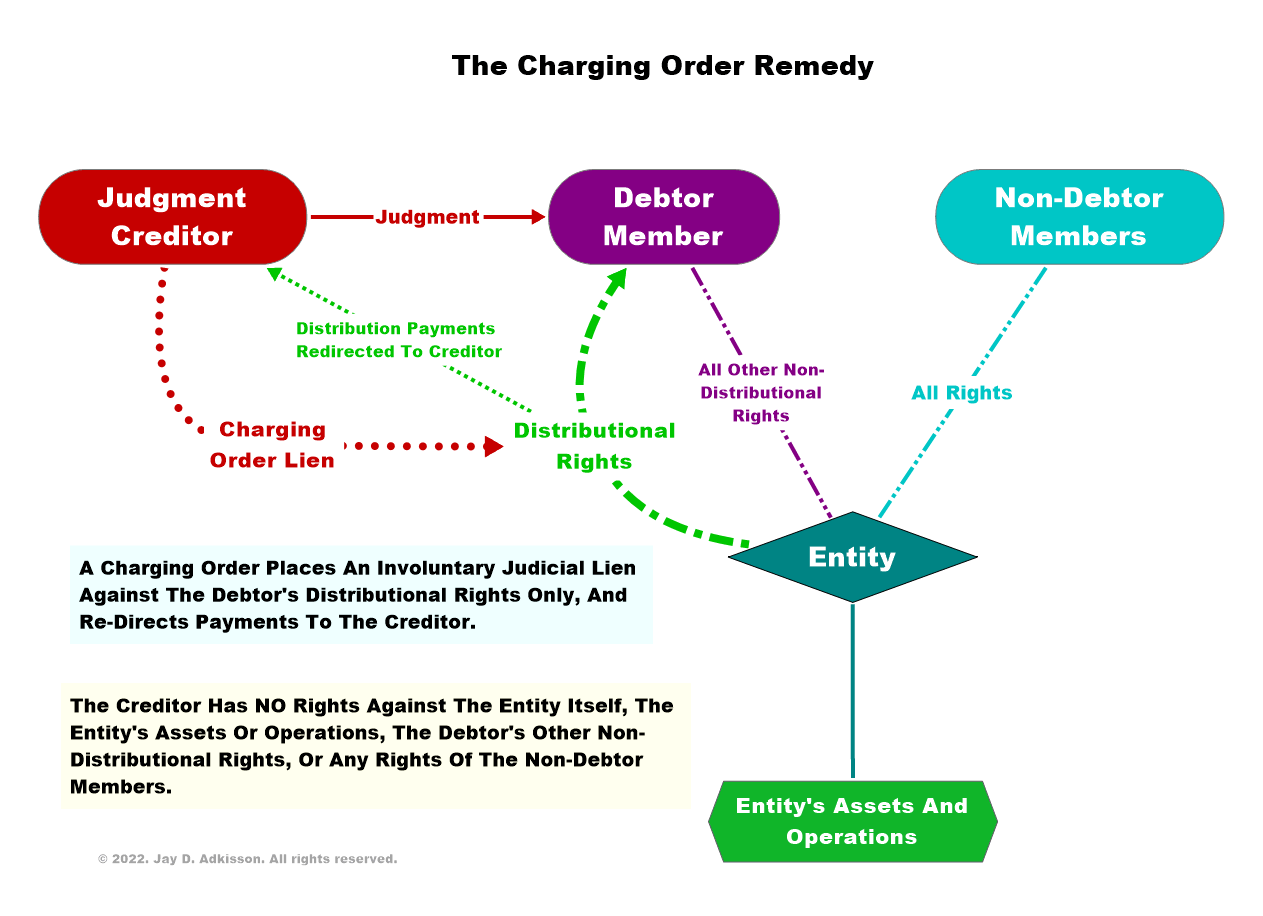 The problem with charging orders is that when there were adopted into widespread use in United States law through the Uniform Partnership Act of 1914, there was little guidance as to how the remedy should operate in practice. While that lack of guidance has been slightly remedied in subsequently legislation, there still is no statutory guidance for how the vast majority of issues created by this remedy are to be resolved, and so that task has been left to the courts to deal with in an ad hoc basis, which of course has frequently lead to even more confusion, court opinions which are simply incapable of being reconciled, and widespread frustration among litigants.

Historically, the charging order did not originally exist in the English common law, and was not imported into the American common law at the time of the formation of the United States. Instead, charging orders are authorized by the state laws relating to partnerships and LLCs, and almost always meaning some version of the Uniform Partnership Act ("UPA", phonetic "Ooh-pah"), the Uniform Limited Partnership Act ("ULPA", phonetic "Uhl-pah"), and the Uniform Limited Liability Company Act ("ULLCA", phonetic "Uhl-kah"). All of these uniform acts were drafted and approved by the Uniform Law Commission, which is comprised of state commissioners appointed by the governor of each state, and then promulgated to the states via legislative liasons for enactment. Together, the UPA, ULPA, and ULLCA are known as the "Harmonized Acts" due to a harmonization project by the Uniform Law Commission ("ULC"), completed in 2013, that was intended to (and did in substantial part) make these acts nearly alike in the language used for their key aspects.

The process of harmonization and the inherent desire for uniform acts to be, well, uniform, has generally been respected by the states; however, some states have substantially tinkered with both the language and substantive effect of the Harmonized Acts as they related to charging orders. For example, some states have eliminated the ability of a creditor to foreclose on a charging order, which creates the potential for certain benefits and problems (mostly problems) in those states.

The point here is that this website considers charging orders under the Uniform Law Commission version of the Harmonized Acts, but the charging order provisions of the Harmonized Acts may have been modified or changed by particular states. Thus, practitioners should caution variances in their state's acts, or in the acts of other states that might apply in a conflict of law situation. This is a principle reason why nothing in this website should be taken as legal advice or opinion, nor should be presumed to apply as state in a given state. Practitioners must understand the Harmonized Acts, their acts of the states that they are dealing with, and note the differences (if any) and their effect.

A further caution is that a few states, most notably California, have taken the time to coordinate their post-judgment procedural regime with the Harmonized Acts. As mentioned, the result of this wholesale failure of the other state legislatures (due largely to the strange lack of guidance provided on the subject by the Uniform Law Commission) is that in these other states the courts must come up with ad hoc procedures to implement the Charging Order provisions of the Uniform Acts. To say that this is an unfortunate state of affairs and has caused considerable confusion among the courts and litigants would be a vast understatement.

It Doesn't Have To Be This Difficult

The Charging Order remedy is an anachronism that exists because of (1) a divergence of English remedy law, which requires that a "charging order" effect an attachment of the debtor's property, and American remedy law, which normally allows a creditor to simply place a lien on that property, and (2) the Charging Order provision of the English Partnership Act was (apparently) thoughtlessly copied into the original Uniform Partnership Act of 1914 -- and been just as thoughtlessly carried over into the revisions of that act, as well as the ULPA and ULLCA, ever since.

There really is no good reason why a creditor should not just be able to provide a copy of the judgment to the entity, or file a copy of the judgment with the Secretary of State's office in the entity's jurisdiction of formation, and thereby automatically create a lien on the debtor's interest. Unfortunately, the Charging Order has taken on a life of its own, mostly spurred as a misuse for asset protection purposes. It persists as an anachronism, a "peculiar mechanism" as one court put it, or what has also been characterized as a "statutory bastard" of American law.

But it is what it is, and we have to deal with the law as it is instead of (for the time being at least) what we desire it to be. 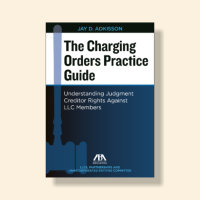 The Charging Order Practice Guide: Understanding Judgment Creditor Rights Against LLC Members, by Jay D. Adkisson (2018), published by the LLCs, Partnerships and Unincorporated Entities Committee of the Business Law Section of the American Bar Association, available for purchase directly from the American Bar Association and also available from Amazon.

Jay Adkisson is admitted to practice law in Arizona, California, Nevada, Oklahoma and Texas. He graduated from the University of Oklahoma College of Law in 1988 and was a member of the Oklahoma Law Review. Twice an expert witness to the U.S. Senate Finance Committee, Jay is also an honorary member of the California Association of Judgment Professionals and a lifetime member of the National Association of Estate Planners & Councils. His books include The Charging Order Practice Guide (ABA 2019) and Asset Protection: Concepts & Strategies (McGraw-Hill 2004), and Jay is currently the Wealth Preservation commentator to Forbes.com. Jay has also served as an American Bar Association section adviser to the drafting committees of the following uniform acts:

Jay's law practice is primarily in the area of creditor-debtor law, and he has served as a court-appointed receiver in two high-profile post-judgment enforcement matters: Gaggero v. Knapp Petersen and Wynn v. Francis. He was also the post-judgment enforcement counsel in Bay Guardian Co. v. New Times Media LLC which involved the collection of a $20+ million judgment against the parent entity of the Village Voice companies. His exploits in that case were later recounted in two articles:

Jay's office is in Las Vegas, but he practices throughout the Southwest United States and often consults with other attorneys on creditor-debtor matters nationwide.